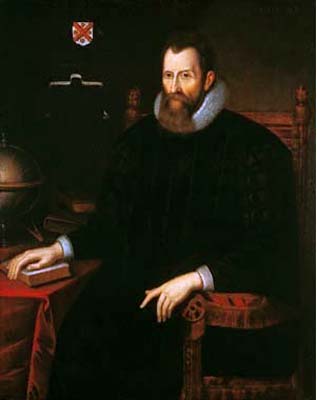 John Napier, the “Marvellous Merchiston” (as he was known in his day), was a Scottish landowner, mathematician, physicist, astronomer and discoverer of logarithms invented the so-called ‘Napier’s bones’, and made common the use of the decimal point. He was enrolled in St Salvator’s College, St Andrews at the age of 13, and it is suspected that he left Scotland to further his education in mainland Europe. He became interested in religion while in St Andrews, being particularly interested in the Book of Revelation and the Apocalypse. Napier was also often perceived as a magician, thought to have dabbled in necromancy and alchemy, and many tales were told of his superhuman powers. He is remembered through his namesakes, Edinburgh Napier University, the crater Neper on the moon, and the French name for the Natural Logarithm (Logarithme Népérien). David Hume described Napier as “the person to whom the title of a great man is more justly due than to any other whom his country ever produced”.