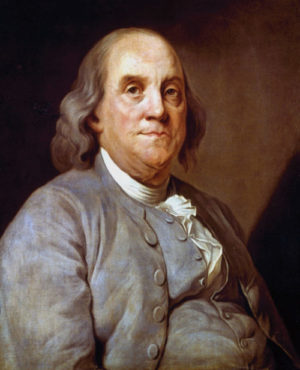 Founding father of the United States of America, Benjamin Franklin, was deeply interested in the world around him and excelled in numerous fields. He was many things in his lifetime: a printer, a postmaster, an ambassador, an author, a scientist, a philosopher, a writer, a statesman and, above all, an inventor. His contributions to the American Revolution and the building of a new nation were only one part of a highly distinguished career. He invented solutions to common problems, including a ‘Long Arm’ to grab books from the top shelf and swimming fins to help him swim more easily at 11 years old. He even made life a bit more musical with the invention of a glass harmonica. His most famous work was in the field of electricity, even inventing a new type of battery in 1748. The University of St Andrews awarded him ‘gratis for his Writings on Electricity’ an honorary Doctor of Laws degree in 1759, and the city of St Andrews granted him freedom of the burgh. Surprisingly, he made the journey to the town for this purpose, and later wrote ‘I believe Scotland would be the country I should choose to spend the remainder of my days in’. Franklin valued academia highly, saying: ‘If a man empties his purse into his head, no man can take it away from him. An investment in knowledge always pays the best interest’.